New Orleans, LA – Today, the New Orleans Regional Transit Authority (RTA) announced the agency’s new permanent fare structure at the New Orleans City Council’s December Meeting. The new fare structure aims to simply the fare offerings, incentivize pass sales for riders who use multiple transit modes for their daily commutes, and offer financial relief to RTA passengers as the economy recovers from the COVID-19 pandemic. The permanent fare structure will take effect on January 1, 2022.
“The RTA is at a pivotal moment to effectively change the transit experience in New Orleans,” said RTA Board Chair, Flozell Daniels, Jr. “The new fare structure is an important foundational element that will help riders overcome mobility barriers and increase equitable access to vital destinations throughout the city. The RTA Board of Commissioners is committed to continuing the work of ensuring our riders have transit options and amenities today and into the future.”

RTA evaluated the impacts of the temporary fare pilot over the past several months concluding with the following results (1) wide adoption of the youth and senior passes, (2) operational efficiencies through fare structure simplification, (3) increased rider satisfaction, and (4) increased utilization of monthly passes. Despite the reduction in pricing on several products, RTA’s passenger fare revenue per rider has remained stable.

“COVID-19 had an enormous impact on our ridership which presented a unique challenge for RTA in helping riders as the economy began to recover,” said RTA CEO, Alex Z. Wiggins. “The adoption of the new fare structure will help passengers as they return to work, school, and get to other destinations within the RTA transit system. By making transit more affordable, we are also making transit more equitable and accessible for all.”

The agency began a 6-month temporary fare pilot in July 2021, which introduced youth and senior fares and passes and reduced the costs of a 31- Day Jazzy Pass from $55 to $45. The new permanent fare structure will include the addition of a 7-Day Jazzy Pass at $15 and the reintroduction of the 3-Day Jazzy Pass at $8. The new permanent fare structure will also maintain youth and senior fares. In addition, the agency has eliminated the upcharge for express routes and transfers.

“RTA’s implementation of permanent fare structure changes demonstrates our commitment to improving the lives of New Orleans residents who utilize public transit,” said Mayor LaToya Cantrell. “These changes align with the City’s goals for improving transit equity and the economic mobility for our residents. Making transit more affordable will ensure that workers and our most vulnerable residents, seniors and youth, can travel around the City safely and affordably.”

"Low-cost transit fares will make it easier for our residents to get to work and school, access healthcare, or run errands. That's key to a more equitable New Orleans. We are in a critical moment of economic recovery. We must take every step to eliminate barriers to opportunity and invest in accessible, equitable, and reliable transportation services in every community. I applaud RTA's commitment and their work to offer cost-effective transportation options to residents." said Transportation Chair, Councilmember Kristin Gisleson Palmer. 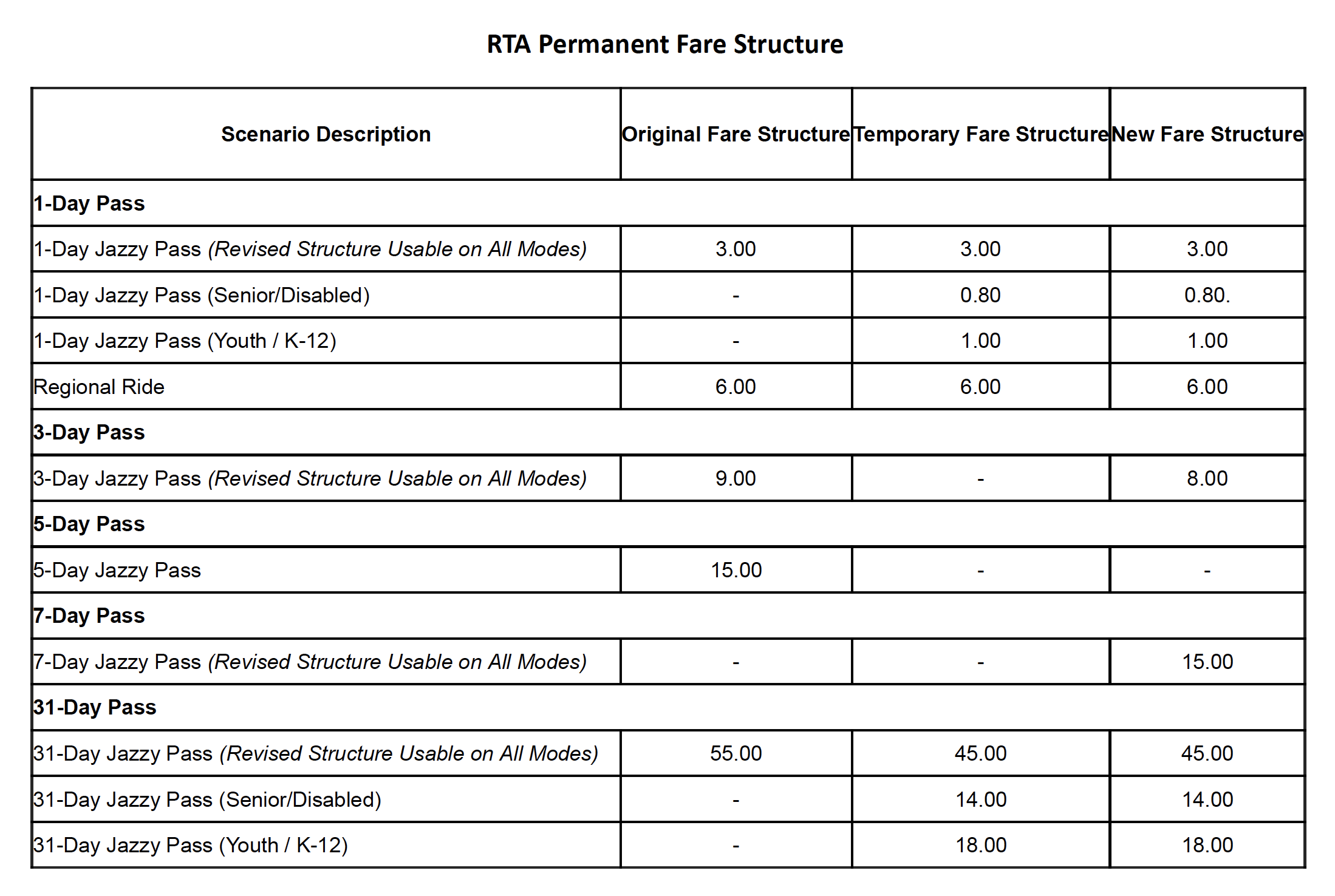